Abortion in the American Imagination: Before Life and Choice, 1880-1940 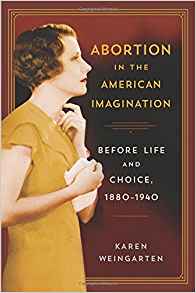 Abortion in the American Imagination returns to the moment when American writers first dared to broach the controversial subject of abortion. What was once a topic avoided by polite society, only discussed in vague euphemisms behind closed doors, suddenly became open to vigorous public debate as it was represented everywhere from sensationalistic melodramas to treatises on social reform. Literary scholar and cultural historian Karen Weingarten shows how these discussions were remarkably fluid and far-ranging, touching upon issues of eugenics, economics, race, and gender roles.

Weingarten traces the discourses on abortion across a wide array of media, putting fiction by canonical writers like William Faulkner, Edith Wharton, and Langston Hughes into conversation with the era’s films, newspaper articles, and activist rhetoric. By doing so, she exposes not only the ways that public perceptions of abortion changed over the course of the twentieth century, but also the ways in which these abortion debates shaped our very sense of what it means to be an American.