Pioneers of Change: Interviews with people who made the 1967 Abortion Act possible 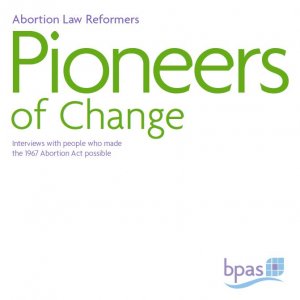 This BPAS publication contains interviews with the campaigners, doctors and parliamentarians who made the 1967 Abortion Act possible. Introducing this new pamphlet, reissued by BPAS for the 40th anniversary of the 1967 Abortion Act, BPAS chief executive Ann Furedi writes:  ‘The 1967 Act was a product of its times. It reflected and codified the concerns of the 1960s and was shaped by the debates and controversies of its day. Public discussion about abortion in the 1960s took place in the context of the social reforms and more liberal attitudes that have come to be regarded as characteristic of that period.’

Abortion Law Reformers: Pioneers of Change presents frank interviews with many of the campaigners, doctors and parliamentarians who brought the 1967 Abortion Act into being, providing an inspiring sense of the spirit in which the Act was conceived and thoughtful reflections on how well the law has worked subsequently.