« Pro-Life » is Pro-LIE: They don’t care that women DIE 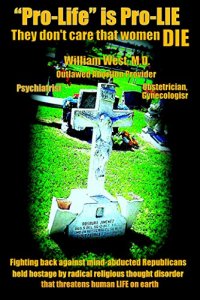 From Dr. West (Amazon.com): This book contains mature subject matter that might be disturbing to some and is for mature readers only. Reader discretion is advised. By that I mean that this is a book about the truth of factual reality that far too many people just can’t handle – or won’t. It is my hope that anyone who begins reading this book will read it completely and with honest and serious reflection upon its content.

I am a psychiatrist, and obstetrician-gynecologist, and an abortion provider (now outlawed by Republican malfeasance in Texas government). This is a book of thoughts on the current Republican Party, the very real Republican War on Women, the misnamed “pro-life” movement, the Tea Party, extreme religion, un-American theocrats among us, and sanctimonious home-grown terrorist bigots and bullies who are quite reasonably referred to as the American “Christian Taliban.” It is about the health and safety of women and teenage girls vs. the appallingly cruel and willful insanity of the extremes of all religions and the unconscionable cruelty of the so-called “pro-life” movement and other related sociopolitical forces using extreme religious belief as license to discriminate against women and teenage girls and the religious beliefs of those women and girls – among some of the many other severe threats posed by pervasive disorders of thought established and reinforced by extreme religious belief that are responsible for ever-deepening catastrophe in this state, this nation, and around the world.